Together with 56 other fly fishers I had qualified to compete in the Nationals by reason of results achieved in State based competitions. Coming into the Nationals I was sitting in 6th place in the rankings which are all important to team selection for international competitions.

A week prior to the Nationals I watched Peter Senior  at age 56 turn back the clock to win the Australian Masters golf. I sent the following text to Chris Bassano ;

“If Peter Senior can win the Australian Masters then guess who might win the Nationals.”

The venues for the Nationals were as follows:

On the night before  the competition gale force winds (100kph) hit the Snowy Mountains. My draw dictated that I would fish Lake Rodney George from the bank in my  first session.I was grateful not to have drawn the Buckenderra Arm of Lake Eucumbene. It must have been awful for those who had to fish Eucumbene first up in metre high waves.

"If Peter Senior can win the Australian Masters then guess who might win the Nationals."

We were told that this attractive looking lake held a good head of resident fish and that it had recently been stocked with small rainbow trout. The bank was marked out into a number of beats and each competitor was to fish 3 beats for 1 hour each  with 15 minutes allowed to move between beats. I had drawn beats 3,5 and 7; to be fished in that order. Beat 3 was on the far side of the lake which meant that the gale force wind would be at my back during my first rotation. On arriving at my beat I was encouraged to see a small rainbow rise close to the bank.Wading in the lake was not permitted and the bank was heavily vegetated. I assembled my collapsible stripping basket plus two rods ( Hardy Zenith 10 feet #7 ) one with a clear intermediate and the other with an old floating line that I use specifically for nymphing. My first mistake was to tie on three flies given the windy conditions and high bank. I soon reduced the number to two.I started fishing with the clear intermediate in the area  where I had seen the rise. On about my third cast a small rainbow ate the sunburst Kate McLaren ( top dropper) when I hung the flies close to the bank.Unfortunately it did not stay on long and as things turned out it was to be the only fish I touched in the first hour. When the hooter sounded at the end of the first session I bundled up my gear and headed to beat 5 as fast as I could. I had seen several fish hooked and some landed from this beat during the first session and it wasn't long before I too was having similar success. The small rainbows seemed to love the small bead head hares ear nymph with orange rabbit fur tail that I had put on the top dropper. I landed 5 fish and lost twice that number including some large resident fish. I was feeling much happier as I moved to beat 7 for my final session. From beat 7 I was casting directly into the gale. During one cast my fly line was blown off course and up into a tree.I had one take on this beat and landed one fish. I had landed 6 fish and the next best  score was 2 fish.

At the end of the competition I noticed that I had only scored 5 fish from Session 1. I now realise that my controllers had only recorded 5 of my 6 fish. I had signed the score card without checking it. There is an important lesson to be learned from this . In future I will keep a piece of paper under my cap and a pencil close at hand. I will record each fish and cross check my score sheet at the end of the session.It could have been a very costly mistake and I would only have had myself to blame.

When I arrived at beat 4 I discovered that it had been fished in the morning session by Jon Stagg and that Jon had landed something like 9 fish. On the plus side this meant the beat held plenty of fish but it also meant that many of them had been caught or hooked a few hours earlier. I knew that Jon would not have missed many.

I give much credit to my success in this session to the Martin Droz seminar that I had attended a couple of weeks before the Nationals.The seminar instilled me with confidence to try different presentations and simplified a number of aspects of nymphing which I had over-complicated.

"I give much credit to my success in this session to the Martin Droz seminar that I had attended a couple of weeks before the Nationals. The seminar instilled me with confidence to try different presentations and simplified a number of aspects of nymphing which I had over-complicated." 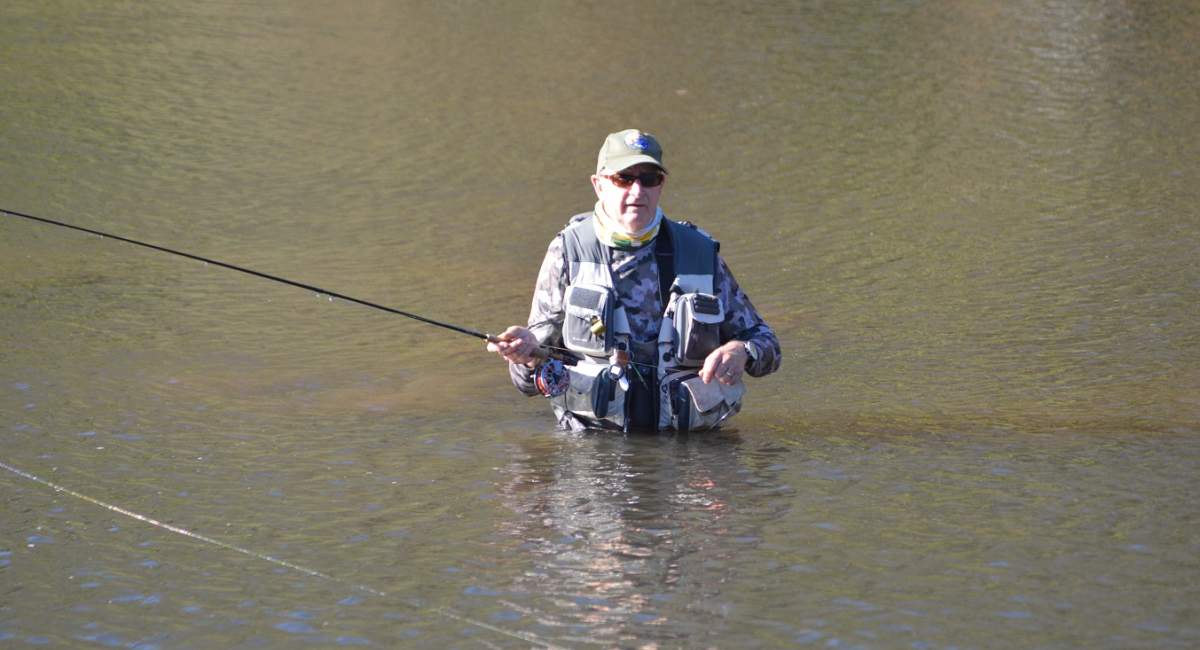 In the early morning light it was impossible to judge the depth of parts of my beat (especially the bottom section that was partly in shade). I knew from conversations the night before that once again, Jon Stagg had fished this beat in session 2 and had landed many fish. In the middle of the beat there was a nice run and above that a long slow moving pool.In the morning light the bottom of the beat remained a mystery. As I rigged up a dry fly rod and my nymphing rod (Hanak Superlight 9 feet 6 inch #4) I thought I saw a rise in the flat water below the good run. I decided to start my fishing there. I fished the area with a sedge crawling along the bank until I saw a platypus and realised I had been deceived. When I stood up I could see that I had been fishing shallow water that was unlikely to hold fish. I moved on to the good looking run and started nymphing.I landed 3 fish in quick succession and lost 1. I still had 90 minutes remaining and had fished the obvious good water in my beat. I now had to decide how to approach the long slow moving pool. I began by fishing close to the banks with a dry fly but nothing happened.I then got into the river and started nymphing the pool. At its deepest it was probably 2 meters deep. Basically there was no or little flow so the nymphs had to worked. When I felt the first tap from a fish that I missed I knew success would come with persistence. I landed 2 solid fish from this pool and lost 2 or 3 others. One fish that I hooked and saw side on as he turned following the strike was a large fish but it did not stay on for long. Five fish gave me a first for this session. 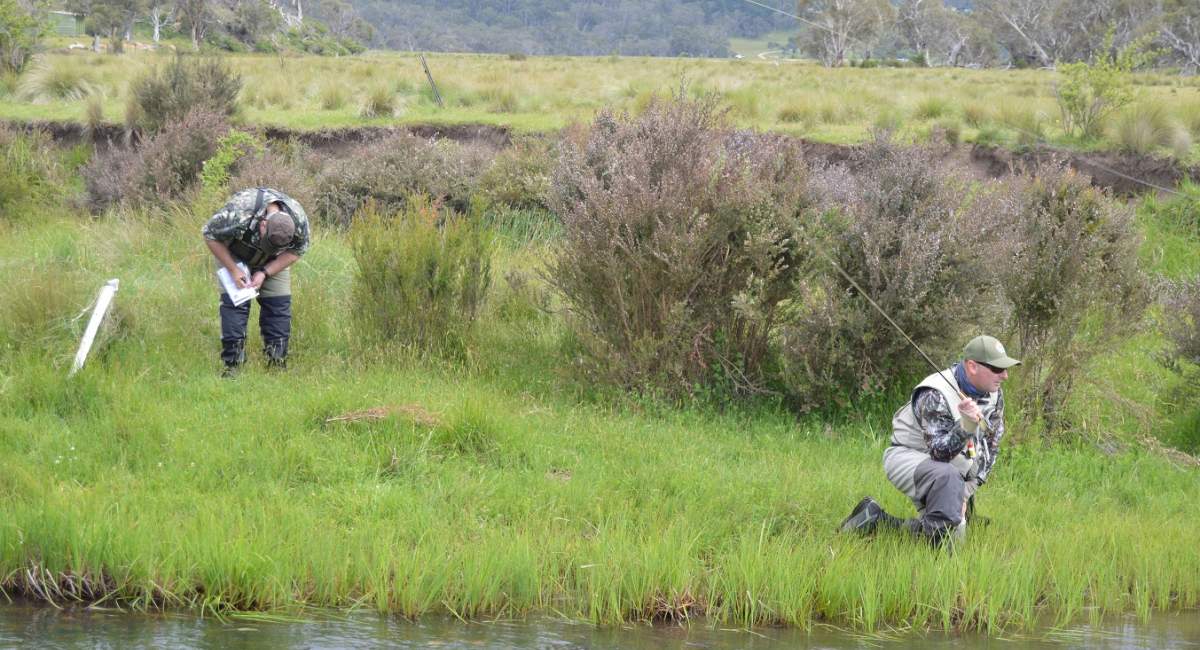 The draw had me fishing the lake from a boat with Geoff Naylor. Geoff fishes Lake Eucumbene often and I  regarded it as a distinct advantage for me to have drawn Geoff as my boat partner. Basically I was happy to go wherever Geoff suggested. I set up my Hardy Zenith with a  DI 5  and a Sunburst Kate McLaren on the top dropper, Hot Lips on the middle dropper and a small red and black bead head woolly bugger on the point.  My plan was to change my top dropper fly regularly and to leave the other two flies in place. After about an hour Geoff said “ we should get a fish off this point” and almost instantly l had a solid take. Mind you Geoff had said “we should get a fish off this point” a hundred times already. I landed a good brown just before the wind was due to blow our boat onto the rocks. The fish had eaten my point fly. When released the fish floated belly up and my heart sank. The fish was retrieved in the landing net and after some gentle coaxing the fish revived and swam off. With about an hour to go I had another take and landed a second fish, this time on Hot Lips. Geoff managed to land a rainbow for the session on a Cormorant on his top dropper. Two fish landed was the best result for my group and I took first place based on size.

Going into this session I knew that John Arbordi and Jon Stagg were one or two ranking points behind me. I deliberately did not look at the actual standings. I knew that a first or second in the last session was what I needed. I drew Tom Jarman my fellow team member for the WFFC 2016 as my boat partner. As I was getting my gear from the car I saw Tom speaking to Jon Stagg. Jon is also a member of our WFFC 2016 team. I overhead Jon say to Tom; "Bring him home Tom." I was very touched by this. Here was my nearest rival in the Nationals urging one of his team mates to bring his fellow team mate home. Competition fly fishing may be highly competitive but it breeds close friendships and good sportsmanship.

I set up my Hardy Zenith with a DI 7 and the same set of flies as I had started with on Lake Eucumbene. After about my second cast from the boat my flyline got caught around a locker cleat. I pulled the line to free it and the cleat cut cleanly through the flyline. As I retrieved the fly ine from the water Tom hooked up. My session was not off to a good start. Tom landed the fish as I switched to a Sweep 7 flyline. I noticed that Toms fish had eaten a Krystal Cat on his top dropper. I also had noticed that Tom was employing a fast rolly polly retrieve. I followed suit .Tom seemed to be hitting fish after fish and I was struggling to get a take. Tom had landed 2 fish and dropped about 3 when I had my first take. I landed a rainbow on the Krystal Cat. A short while later I had a take on the hang and landed a second fish this time on the point fly. Tom was continuing to get lots of takes and had 4 fish landed. I saw one member of my group land 2 fish and another competitor land 3 fish. With 20 minutes to go I knew I needed another fish. Tom was no longer getting takes and my takes had been few and far between in any event. I switched to a floater (my old never cleaned nymphing line that sinks very slowly)  with 19 feet of fluorocarbon leader. I put a bead head Montana on the point, Red Holo Cruncher in the middle and Traffic Light Cruncher on the top dropper. My eyes fixed on the loop of flyline from my rod tip as I slowly kept in touch with the flies. I saw the softest of takes and drew the line tight with my left hand. A 46cm rainbow was soon in the net and my score sheet was looking a lot better. Three fish gave me a second on fish size.

A dream had been realised and I was all set to relax and enjoy the presentation dinner and contemplate where the win might take me in terms of team selection. On top of that I received some wonderful prizes from our Sponsors Hardy & Greys (10 foot #4 Hardy Zenith Rod and Hardy Ultralite CLS reel with spare cassettes).

A special thanks to Peter Senior for inspiring me to reel in the years. 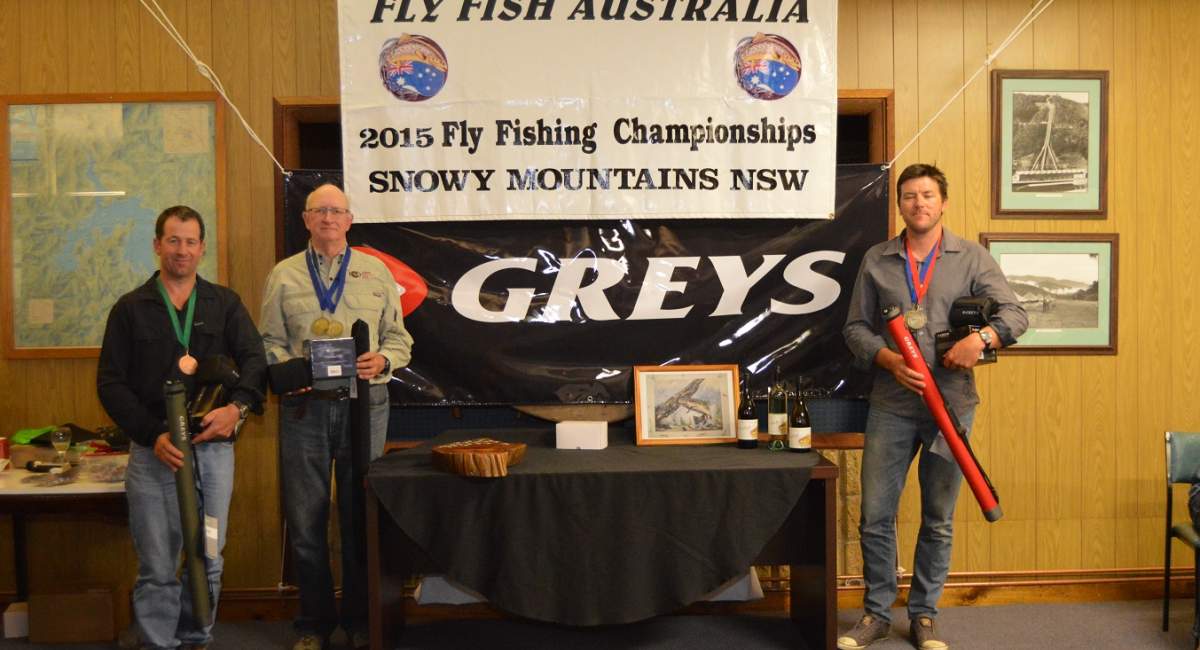