We have been very, very busy and each day I have been writing a report. For the past ten days, I have written about the day's activities but at no time was I up to date. I would almost finish before something came up and I would then get back to it the following day.

Two days ago we moved into the official hotel and I knew I would have time to complete what was now more like a novel than a simple report. The opening ceremony was a late affair and this gave me time to complete the "book".

Having finished it, I went to reception to get the Internet code, I returned to my room to find the entire thing gone! My iPad was on the floor and as I had written it in the "notes" section, it had not been saved. I don't know how the hell this happened. There were things on top of the iPad but surely this would not have been placed unluckily enough to delete the entire note. Anyway, I am hopeful that when I return home, my lovely wife might be able to find it somewhere on the iPad. If she does, I will send it to you then. It has been hard to get back into it because that sort took the wind out of my writing sales.

I am not even going to mention those ten days now. It hurts too much.

The following reports will be short and sweet.

The opening ceremony was the usual story. Not particularly well organised and it rained at the start after having thirty plus degree days every day. It actually has not stopped raining. The ceremony was pretty good once it got going as we managed to catch up with old friends and see a bit of the local culture and listen to traditional music. People lined the streets and cheered for the teams as they entered the area. The debacle of checking into the hotel was behind us. I will try and recall a few things. 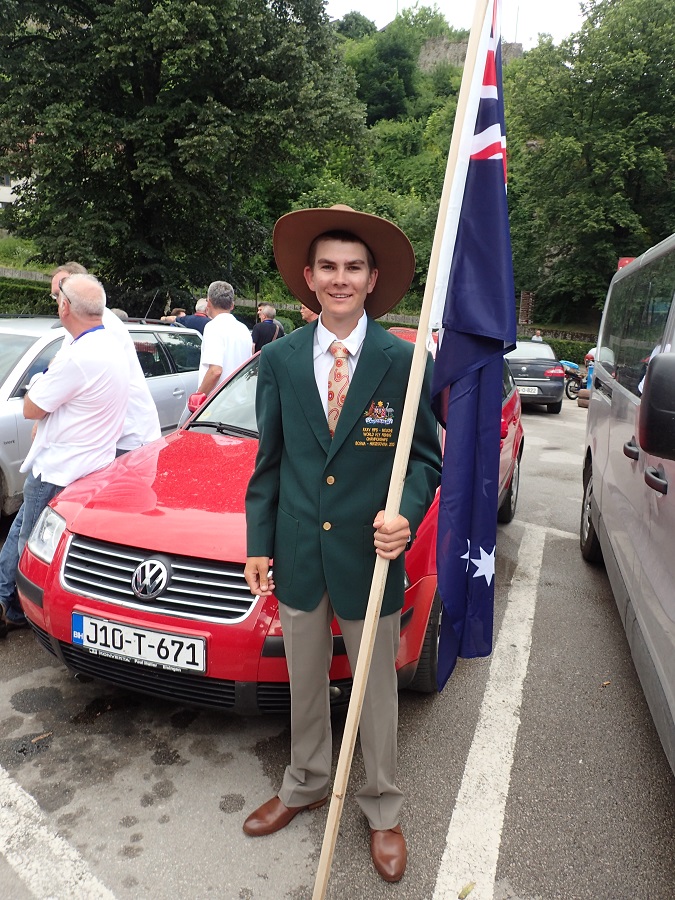 We had asked for single rooms but instead, we have rooms for three people with two beds! They are tiny rooms and certainly not big enough for us and our gear, we have left tables, televisions, etc outside our door in order to fit. The other countries are the same. There were not enough hotel rooms so other teams have had to be relocated. They are now spread out across the city and travel back here for all of their meals. We let reception know that having two beds was not good enough. Mick, Vern and Luke are sharing a room while Josh, Staggy and I are in another. Luke had a fold out single chair to sleep on. When we complained about he lack of bed in our room, they sorted it out while we were at the opening ceremony by taking likes chair and putting it in our room!

Dinner was very late and most teams walked out and went into town to eat. Not a bad option in hindsight!

I am Cramming things in here as time is precious.

The rain is falling and that could make it tough. Basically, the beats within the rivers are likely to be so unfair that where you fish within a river is far more important than which location you are fishing first, second, third and so on.

My bus leaves at 5am as I am the first one off. Stagg is last at 7:30am. The session starts at 9:30am and the afternoon sessions starts at 4:30. They are three hours long.

We are all feeling prepared for the challenge and have our fingers crossed for our team mates when it comes to the lottery of the draw. Josh is heading to the Pliva river tomorrow to watch while Peter is at the lake and Jim will rotate between the Sana and sanica depending on who draws the worst and needs help. The Verbas will be running high and dirty and there is little the captain can do to help there.

There are not too many nerves around the team at the moment but that may change in a few hours time. Flies are tied and leaders sorted out. Roll on 9:30.

As a side note, Luke and Mick went for a walk today to the main tourist attraction of this town, a waterfall. With all of this rain around, it would have been beautiful. As they approached the viewing area, a man on the platform looked up at them and started getting agitated. He approached them and put his hand in his pocket as he got within a few meters. He pulled a police badge and told them that there had just been a murder and that they should walk back to the hotel. Below the platform, police were moving around and the boys went back to the hotel in haste.

I am so sorry for the loss of my first novel. These shirt reports will hopefully be forthcoming now. There are two sessions tomorrow, one the next day and then two in the last day. Wish us luck with the draw.