I’ve been fly fishing for around 30 years, and am particularly keen on loch style fishing out of a drifting boat. This style of fishing demands being able to cover a range of fishing scenarios, from covering rising fish with a floating line through to dredging the depths with a DI8.  At last count I had ten lines to choose from for my loch style fishing. I've found that cassette style reel systems are ideal for housing these lines, and are certainly more cost effective than carrying up to ten fully machined spare spools.

I have seen the best and worst in cassette reel design, having owned four different sets over the last dozen years. I recently decided to retire my latest cassette system due to the increasing difficulty I was having changing spools with warping of some of the polycarbonate spools, and the metal ring designed to retain the cassette was starting to strip the thread. It was also much heavier than I would like. I only got two seasons out of that reel.  In looking for a replacement, I had a few basic but important requirements:

1. The reel needed to be light

2. The spool changing system needed to be simple, yet bulletproof

3. The drag system needed to be smooth with a good range of adjustment.

I ended up purchasing the Hanak 68 Lake reel and after three months of extensive use, I couldn't be happier.

A lot of thought has gone into this reel. The reel is light, some 169 grams, and even the polycarbonate spools are heavily ported to keep the weight down.  The main frame and front plate is metal, not composite, which gives a sense of strength and durability.

The spool change system is simplicity in itself.  There are four circular raised sections on the ported spool.  It’s just a matter of lining these up with the corresponding section of the front plate and the whole thing clicks into place.  Removing the spool is as easy as placing your fingers inside the spool, two thumbs on the inside of the front plate, apply a little pressure and the spool pops out.

The drag is quite smooth and more than adequate for trout fishing and the large drag knob is functional and well placed.

All in all, this is a great reel at a great price.  The Hanak 68 Lake reel comes with two spare spools in its packaging, and spare spools cost about $10(AUS) each.  My complete set up including an extra seven spare spools was purchased from a local retail tackle store for under $250. What a bargain!

The Hanak 68 Lake reel also has a little brother, the 46 River, and I suspect that would be a very handy reel for heavier river applications (like swinging down and across with streamers) or as a good option for a 5/6 weight bank fishing set up.

Hanak is producing some beautiful fly fishing equipment, designed and field tested by the best fly fishermen in the world. Their Superlite rod range is gaining a massive following and their consumables such as Hanak Championship fluorocarbon, and barbless hook range have become staples in the competition fly fishing toolkit. I am really enjoying using their equipment and I thoroughly recommend you check it out. 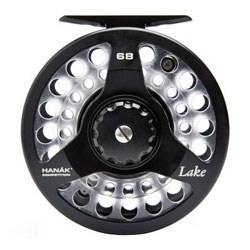 A note from Rainbow Lodge: Phil Ravanello has represented Australia in both the Commonwealth and Oceania Fly Fishing Championships. He has won the New South Wales state title (individual) and has medalled on numerous occasions in the team event at the national titles. He has been heavily involved in the committee of Fly Fish New South Wales for almost a decade and is currently the secretary of Fly Fish Australia.

To find your local Australian Hanak dealer please click the logo below: