Stewart fished beautifully, winning easily and securing great practice for his up coming trip, representing Australia at the Commonwealth Fly Fishing Championships in Canada. Here, he tells us more about the competition from the winners point of view.

Last weekend saw the whole Rainbow Lodge guiding team head up to Tumut (NSW) for the final competition of the calendar season. We were all keen to get in some final competition fishing before going away in representative teams in a few months. The lure of a river only competition is also a huge drawcard, pardon the pun.

I would describe the fishing as fantastic but patchy, on account of schooling rainbows. If they were in your beat you were likely to catch good numbers but if not, you were struggling to catch fish in the 2 hour session. If you were to fish the river socially with access anywhere, you would have a great day walking past the runs with few fish and capitalising on the runs where they were plentiful. On the Saturday morning session Tom Jarman and myself each drew good beats catching 14 and 26 fish respectively. Only 22 of my 26 reached the 16cm minimum limit and I’m not sure how many undersized ones Tom landed. Basically the fishing was awesome! Christopher Bassano caught 7 in the first session, by far the most to come off that beat all competition, all of which measured 40cm+ and he dropped one about 65cm at the net! So there were some very good fish about too. The flies that worked varied widely. I caught all but 2 of my fish in the competition on a dark nymph with a copper bead, while Craig Coltman (3rd) tells me he caught all of his on a flashy silver beaded fly. Most competitors were fishing either French or Czech styles of nymphing with the Czech style proving more efficient on the aggressive little rainbows. The true form of this czech style has only recently hit our competition scene due to the influence on Martin Droz.
As the competition played out it became apparent that the fish would hold up in a variety of different water types, which was a little unusual. More commonly you will tend to find them concentrating in similar water types, all in waste deep runs for example or all under overhanging willows. In my first beat they were all in the beautiful waste deep runs, however the following morning I found most of them in 10cm of water on gravel shelves leading down into the runs.
In these competitions it is well known amongst competitors that the person who draws the best beats should win the competition, so it is hard to say someone didn’t fish well despite finishing lower in the standings as they may have had a terrible draw. Which is why Chris wasn’t in the top 3 like usual in this comp. However it is the person that can catch those few extra fish in the tougher beats that ends up climbing above their fellow competitors. In this competition there were 2 other methods which caught the odd extra fish for myself. The first was a very slow swinging fly in the backwaters. The technique was as follows, the rod was held very high and no line was left on the water (as per the Czech and French nymphing styles). With no line on the water the nymph swings much slower and stays deeper in front of the fish for longer and possibly imitates the natural a little better by being a little closer to a normal speed. This technique caught 5 fish over the last 3 sessions, which makes a big difference. The other technique was fishing water that hasn’t seen a fly yet, which is usually under trees and structure. Sounds simple but often punching a cast in that no one else has done yet is not easy, otherwise it would have already been done! It is all too easy to try and punch the first one right in underneath which usually results in catching a tree and you spooking everything as you wade in to get the flies back. By slowly edging in further each cast you can get used to the cast you’re trying to do and eventually get it spot on. This caught a good fish in my last session which was very valuable.
All in all for the comp 367 fish were caught by 28 anglers, this equates to a fish every 36 minutes by every angler for the entire comp. Which is astonishing given that the same water is fished 4 times over the weekend.
The Rainbow Lodge guiding team did very well holding the top 4 spots on the Saturday night after day one, and finishing with 3 of the top 4 spots after the Sunday. Tom Jarman 4th, Craig Coltman 3rd and myself 1st with John Fisher of NSW taking 2nd. The other person that needs a mention is the organiser Geoff Naylor who pegged beats over 18km of river, got private land access for the comp and did the 18km of clean up removing beat markers following the comp. Thank you Geoff.
Stewart Dick
Rainbow Lodge Guide 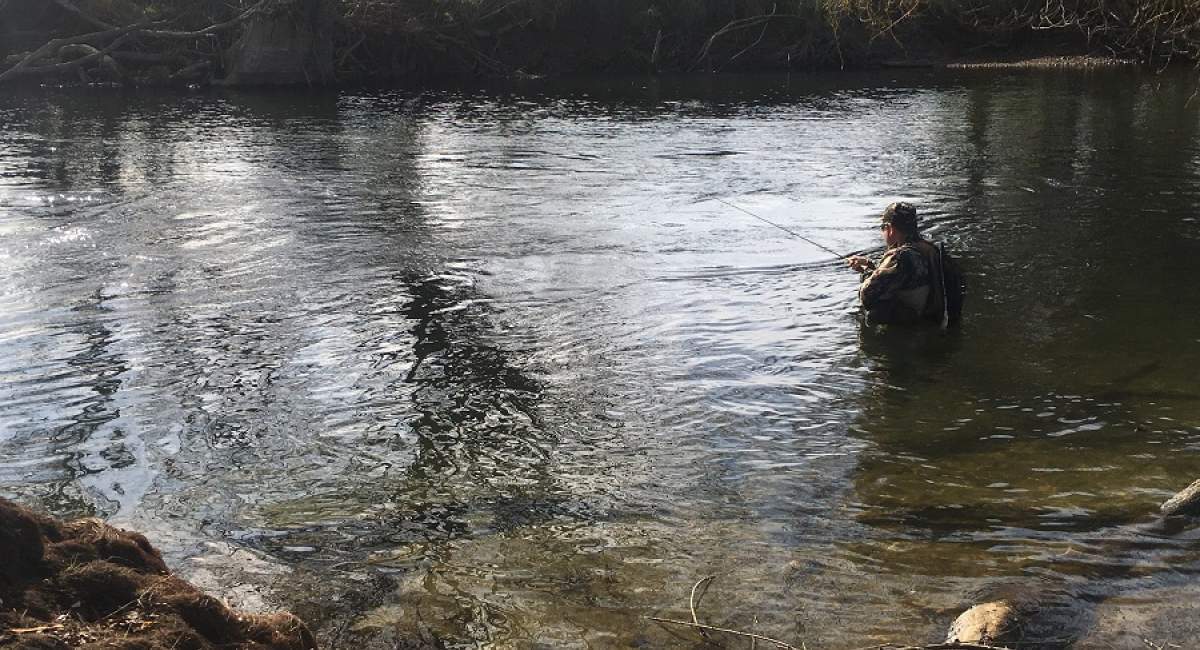 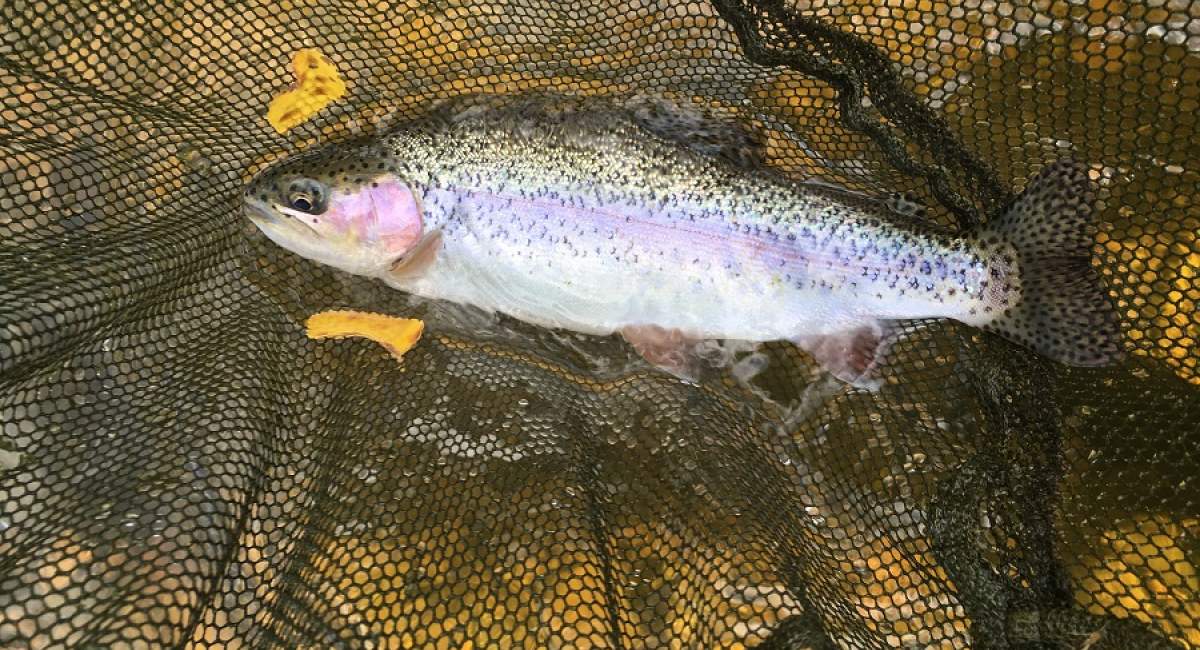 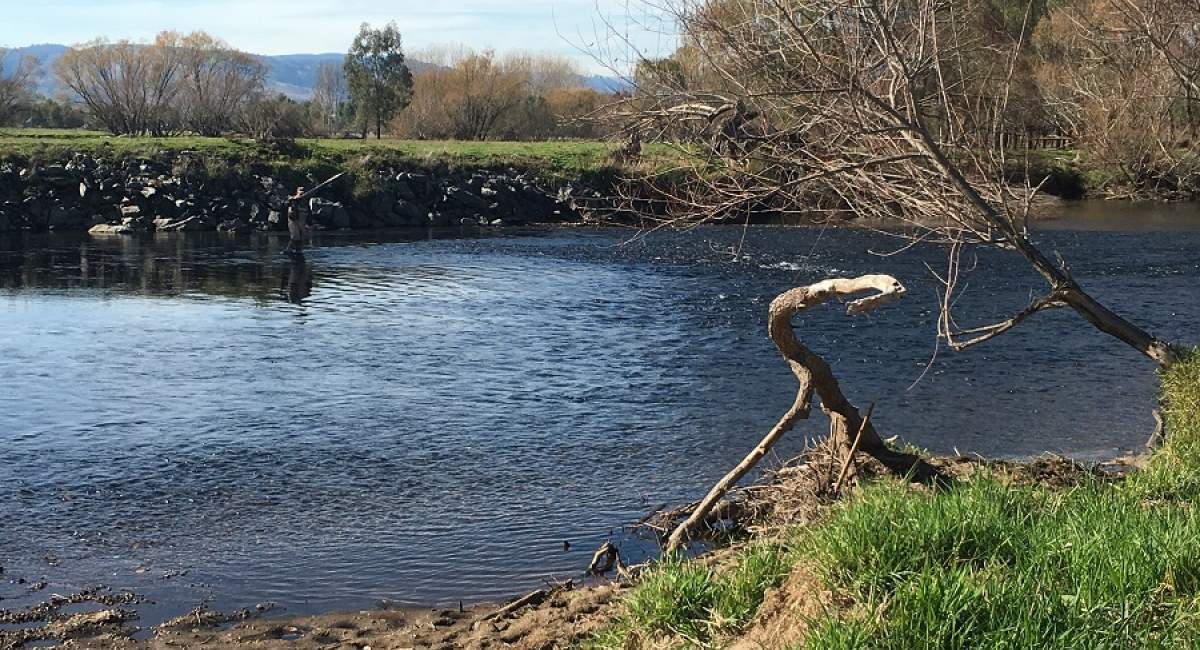 Finding these honey holes was critical to success. 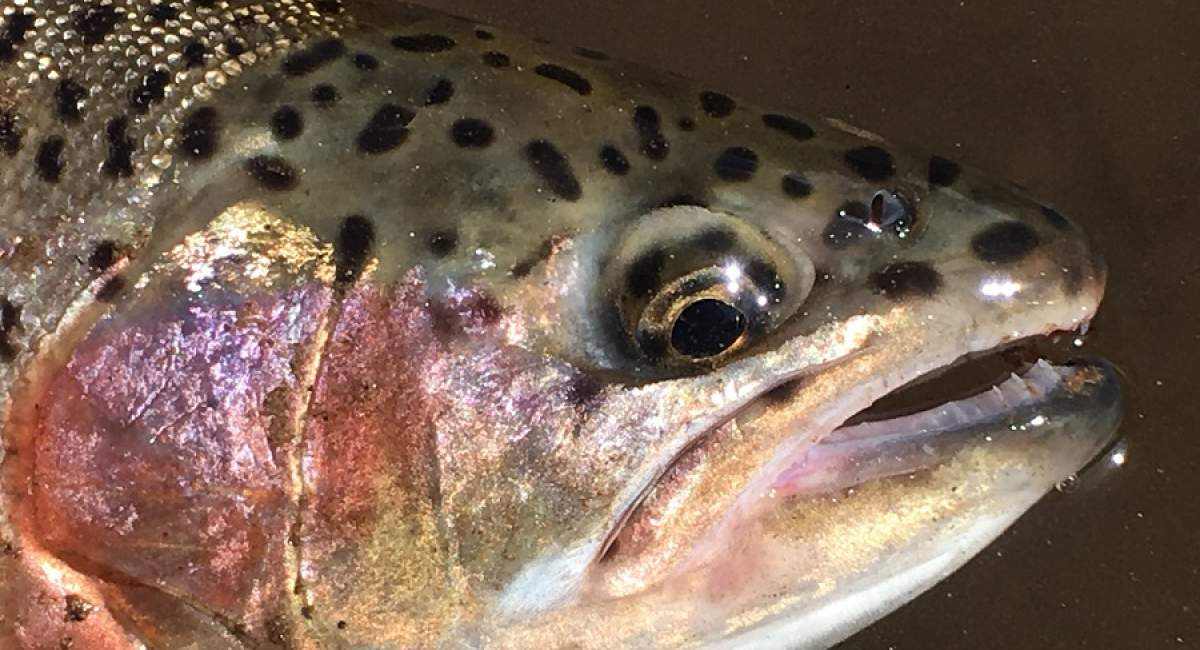